2017 was a year full of amazing camping, hiking and backpacking adventures. A few firsts included visits to Yosemite and the North Cascades, my first solo hike, most elevation gain on a day hike, camping on a beach, and not one but two(!) falls that injured my right knee. Here are highlights from each of my trips, with links to full trip reports and more photos.

January 15: The new year started with a snowshoe hike on Mount Hood, from Timberline Lodge up to the Palmer Ski Lifts under bluebird skies with endless views. We took the Mount Hood Express bus from Sandy to Timberline Lodge, which was handy since it meant I didn’t have to put chains on my car to make it up the Timberline Road.
2.8 miles with 1,390 ft. gain

January 28: Snowshoeing to see a waterfall is always a treat, and Tamanawas Falls never disappoints. The snow was packed down enough that we wore microspikes instead of snowshoes, which made it easier to go across a couple of bridges on the trail. This place is quite popular in the winter, so go early to avoid a crowded trail.
4.3 miles with 850 ft. gain

February 26: At an annual weekend getaway with friends on the Oregon Coast, two of us decided to explore tide-pools at Hug Point, but the sunset stole the show.

March 11-13: Itching to spend a few nights outside, I headed to Smith Rock State Park with a couple of friends for two nights of camping and hiking. We hiked the Summit Trail and they took the Misery Ridge trail while I went all the way around the park on the River Trail.
7.9 miles with 1,350 ft. gain

For me, spring is all about getting in good condition for the upcoming backpacking season, so I made a plan with a few friends to do conditioning hikes every weekend in April.

April 1: The Multnomah-Wahkeena loop is one of my favorite hikes in the Columbia River Gorge. It’s a fairyland filled with beautiful creeks, cascading waterfalls, and moss and ferns everywhere.
5 miles with 1,600 ft. gain

on the saddle behind Hamilton Mountain

April 10: The steep hike up to the summit of Hamilton Mountain offers many rewards: waterfalls and streams, interesting rock formations, and sweeping views of the Columbia River Gorge.
7 miles with 2,300 ft. gain

April 17: For the Wahkeena-Angels-Devils loop hike, we started on the Wahkeena Trail, hiked up to the spring and over to Angels Rest, then to Devils Rest before returning down the Wahkeena Trail. This hike is an awesome combination of cascading streams and waterfalls in a mossy forest with great views of the Gorge. While Angels Rest is one of the most popular hikes in the Gorge, I’ve made three attempts yet still never made it out to the point due to high winds.
8.3 miles with 2,729 ft. gain 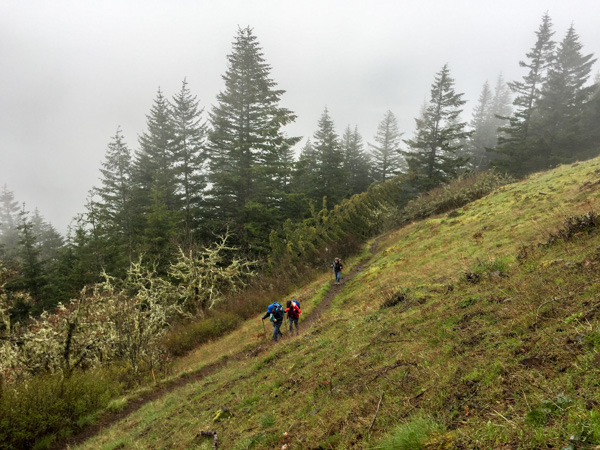 April 24: We didn’t let the rain or fog stop us from doing our final conditioning hike in April: the Herman Creek to Indian Point loop. Starting on the Herman Creek trail, we took the super-steep Nick Eaton Way Trail to the Ridge Cutoff Trail and then the side trail down to Indian Point. Due to the conditions, it had an eerie feel with only a few peek-a-boo views through the moving fog. For an easier descent, we took the Gordon Creek trail back to Herman Creek. This was the most elevation gain I’ve ever done on one hike… I’m getting stronger!
8.2 miles with 3,000 ft. gain

view from the Summit Trail at Smith Rock

April 28-30: I had planned to go on several backpacking trips this spring, but the weather did not cooperate, so I headed to the high desert of Central Oregon and Smith Rock State Park once again for two nights of camping and hiking with a few friends. Unfortunately, while walking through the campground looking for a spot, I fell and hit my knee HARD on a big rock. It swelled up like a grapefruit, so even though it was 28 degrees overnight, I had an icepack on my knee through the night. The next morning, it felt a bit better so I did the Summit Trail hike. Probably shouldn’t have since I paid for it by not being able to hike for two weeks afterward, but it was a great day for a scenic hike!
7.9 miles with 1,350 ft. gain

May 14: After recuperating from my knee injury, I needed an easy hike. I’ve done the Salmon River Canyon Trail many times and it’s always a pleasure to spend time here. We hiked to the canyon viewpoint, but my favorite spot is the view from the bridge above. I just can’t get enough of fairyland forests with streams.
7 miles with 1,000 ft. gain

backpacking out on the Hoh River trip

May 19-21: It’s finally time for the first backpacking trip of the season at the Hoh River rainforest in the Olympic Peninsula! We hiked in to the Five Mile camp to set up for two nights.
16 miles with 960 ft. gain

May 27: The Coast Range of Oregon is often overlooked by hikers, but it’s close to the city and usually accessible year round. We headed to one of my favorite easy trails along Gales Creek.
5.3 miles with 950 ft. gain

above the clouds at Saddle Mountain

May 28: The wildflowers were in full bloom at Saddle Mountain, and while a low layer of clouds obscured views to the north,  we could still see Mount Rainier, Mount St. Helens, Mount Adams, and Mount Hood from the summit.
5.2 miles with 1,700 ft. gain

May 31: On a trip to San Francisco and Yosemite, we stopped at the Redwoods National Park for one night of camping. This is a place I’m definitely going back to for more exploration and hiking!

view from Glacier Point at Yosemite

June 2-4: I can’t believe it took me this long to get to Yosemite National Park! It truly is a grand place. We spend three nights in the tent cabins and did a few short hikes in the valley.

June 11: On my last hike in the Columbia River Gorge before the Eagle Creek fire in September, we hiked on the Herman Creek Trail to Casey Creek. On the way out, I tripped on a rock and fell, hitting my right knee (again) and my head on rocks before doing a flip off the trail, landing on the downslope. I managed to hobble out the last half mile to the trailhead with the help of my friends.
8 miles with 1,800 ft. gain

camping on the beach at Shi Shi

June 22-25: On a three night backpacking trip during the summer equinox at the Olympic Peninsula’s Shi Shi Beach, we camped on the beach and experienced the longest sunsets I’ve ever seen. The tides were the lowest of the year, with many tide pools to explore at the Point of Arches.
8 miles with 200 ft. gain

July 2: Silver Star Mountain in Southwest Washington is a great hike for wildflowers and panoramic views. We took the Grouse Vista trail to the summit of Silver Star.
6 miles with 2,000 ft. gain

July 26-29: This was one of my favorite trips of the year: a three night backpacking trip to Rampart Lakes in the Alpine Lakes Wilderness, with a hike on Alta Mountain. I will be back to explore more of this area!
16 miles with 3,900 ft. gain over four days

August 9-12: This was my second backpacking trip to Goat Rocks. We spent three nights and did hikes to Goat Lake and a short loop on the PCT and Bypass trails. There were tons of wildflowers, with plenty of flying insects, hot weather, and thunderstorms the last morning that made us cut our trip short.
17 miles with 4,500 ft. gain over four days

view from Sahale Arm in the North Cascades

August 23-27: My first visit to the North Cascades was a three night backpacking trip at Cascade Pass. With glacier-clad peaks in all directions, it was a stunner for sure! My body is still learning how to do these longer trips, and I suffered from a combination of heat exhaustion and electrolyte imbalance, making the long hike out more arduous than expected.
21 miles with 5,200 ft. gain over four days

September 11-13: I think this was my 16th time camping at Cape Lookout with my husband. On this trip, two good friends joined us and we were treated to beautiful sunsets and views of the Milky Way and zillions of stars.

September 18: A day hike to Burnt Lake and East Zigzag Mountain turned out to be a scouting trip for backpacking the following weekend. And there were no biting black flies this time!
9.5 miles with 2,000 ft. gain

September 23-25: My last backpacking trip of 2017 was at Burnt Lake, with another day hike up East Zigzag Mountain. On both trips, people told us about a bear that they saw on the trail, but we never did see it.
11 miles with 2,200 ft. gain over three days

October 6: I’ve hiked around Bald Mountain many times, but never took the side trail to the top until now. To make the hike a bit longer, we started on the PCT at Lolo Pass.
7.5 miles with 1,300 ft. gain

October 8: My favorite place for fall color is Indian Heaven Wilderness. The entire area was closed due to a wildfire and I didn’t think I’d have a chance to see it this year, but it reopened just in time for this day hike to Blue Lake.
7.5 miles with 900 ft. gain

October 14: As soon as the rain returns to the Pacific Northwest, I’m ready for hiking in forests with plenty of moss, ferns and water. This day hike on the Little North Santiam Trail is rarely crowded and always a treat.
7 miles with 1,800 ft. gain

October 26: On the way to attend the Oregon Trails Summit in Bend, I stopped to do my first solo hike at Smith Rock State Park. After crossing the bridge over the Crooked River, I took the Wolf Tree trail to the Burma Road trail, then the Summit trail around to the River trail and back to the bridge. While I was solo, I was rarely alone as this is a popular location, with a lot of rock climbers and hikers enjoying the views.
8 miles with 1,400 ft. gain

November 4: Every year, I look forward to the Trails Club of Oregon’s annual Backpack Seminar. This was my fourth time giving a presentation at the seminar. This year, I focused on Trip Planning 101: How to Plan a Backpacking Trip. While there, we hiked in the snow to Government Camp and back.
8 miles with 600 ft. gain

November 18: I’ve been wanting to do the hike to Hart’s Cove for a long time, but since it’s only open for half of the year and I usually forget which half, I finally found a time to make it happen. Wow. It’s a special place.
6 miles with 1,100 ft. gain

December 17: Just before Christmas, a friend and I headed to Silver Falls State Park for a loop hike to see 10 waterfalls.
8.7 miles with 700 ft. gain

the trail at Gales Creek

December 30: A second hike to Gales Creek this year, with water running higher in all of the creeks than I’ve ever seen here before. We were turned around twice when we decided not to cross high tributary streams that would have meant fully submerging our feet on a day in the mid 30s.
5.1 miles with 800 ft. gain

I feel much gratitude for being able to complete all of the adventures and look forward to many more in 2018! Happy New Year!