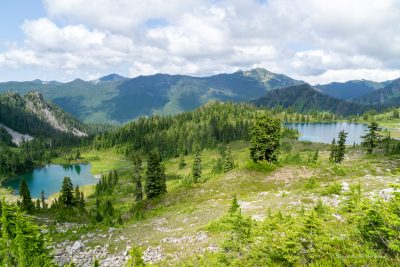 Five day backpacking loop on the High Divide trail, with one night at Deer Lake, two nights at Lunch Lake in the Seven Lakes Basin, and one night at Sol Duc Park.

The Enchanted Valley is located in the Quinault rainforest on Washington’s Olympic Peninsula. This was a three night backpacking trip, with plans to camp near Pony Bridge and Pyrites Creek.

Washington’s Olympic Coast is a wild coast – with extremely limited access to vast sections of it. About 70 miles of this incredibly scenic coastline is part of the Olympic National Park and accessible to hardy backpackers willing to time their trek at low tide to round headlands, or to use ropes to reach to overland trails.

The Hoh Rain Forest is one of the wettest places in the continental United States, with an average of 150+ inches of rain every year. This trail along the Hoh River is filled with many shades of green – in the form of tall evergreen trees and in the mosses and lichens hanging from every surface.